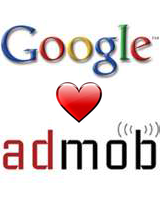 Bloggers and tech watchers are all a buzz today with the news that Google has acquired mobile ad leader Admob. Great move for Google and a massive congrats to Omar and the AdMob team. They’ve built up quite an impressive business in a few short years; not only becoming the largest mobile ad network, but also amassing an amazing amount of data on how people are using and engaging in mobile applications.

As noted by Forbes, Google now has access to a ton of competitive data that will bode well in the mobile platform war just heating up with Apple. I’m not discounting AdMob’s ad business but if it was the ads Google wanted then why did they wait so long to make the buy? I remember attending Dealmaker Media’s Under the Radar Mobile conference in 2007 where Omar pitched Admob to an audience of eager web heads and a panel of investors. If I remember correctly, one investor remarked, “if you can grow this you’re perfect acquisition bait for Google”. Grow it they did but Google didn’t previously step in.

AdMob has grown leaps and bounds, even making its own acquisitions to maintain it’s mobile ad leadership position. I often wondered why in such a hot space they hadn’t been acquired either by Google, or better yet, by Microsoft. Why wouldn’t Redmond step in and get a leg up by acquiring a company serving billions of mobile ads?

AdMob is located literally 20min down the road from the Googleplex. Their ad platform takes a lot of queues from AdWords. Perhaps Google played supportive big brother to Abmob’s success behind the scenes? Here’s my far fetched theory; Admob grew the business on venture money and lots of skill and technical aptitude, and possibly benefited from mentoring by folks at Google. When it got to a point that the ad business was mature enough and the data valuable enough, the acquisition was a understood formality. Microsoft, Yahoo, etc. new of the close relationship and knew that any approach would be rejected outright. Crazy?

Well, no matter what the facts are Admob is a great success story on it’s own and now a very valuable business, data, and team for Google. My conspiracy theories aside, congrats to all involved.