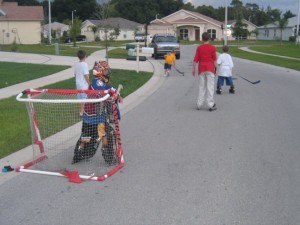 This post is part digital commentary but mostly an observation on the state of our next generation. I’m not talking “millennials”, I’m talking about the kids that should be playing hockey on the neighborhood street not with a controller in their hand. I love and marvel at technology. How our world is continually transformed by amazing ideas executed by passionate and talented entrepreneurs is phenomenal. But the sad thing is technology killed the kids.

Before: Play games with other kids in the neighbourhood until the street lights came on

Now: Play games by yourself or with people online using XBox or Playstation

Before: Walk over to your friend’s house, knock on the door, ask if they can come out and play

Before: Call your friend to talk about the latest gossip

Before: Get together and talk

Now: they Tweet, FB, game, and IM with “friends” they might have never seen and call it being social

Yup, this is a rant with a point. Something that is blatantly obvious and kinda sad when you think about it, but the saddest realization is that to the next generation, to the kids of today, this is 100% normal. It’s the way it should be in their eyes and with all of the tools at their disposal its hard to stop.

I propose something radical. Parents of kids age 5-15 (where we might have some hope left) listen up! Take away their smart phone when they’re at home. Make the iPad, XBox, and home computer be something of a luxury not the de-facto way to spend time. Grab your kids and take them outside…or hopefully watch as they actually go outside. This will only work if ALL parents in a neighbourhood do it. If not, then everyone will just end up at the kid’s house with the XBox lit up. This idea of forcing real-world social behaviour might just be crazy. Think about that for a minute. Isn’t the fact that it is a crazy idea what’s crazy?

There is hope. I’ve seen kids playing outside. It’s rare but you can still find these brave souls. I see the irony of a guy that loves tech and makes his living bent on building the latest and greatest apps ranting about this but there’s a time and place for everything. My hope is that we can instill this balance and the idea that there is more to life than something that has an on button.

This might be a lost cause but when my little guy grows up I just might take him outside and play catch or shoot a few pucks and give the tech we’ll have a break. Who knows maybe he’ll even make some friends.