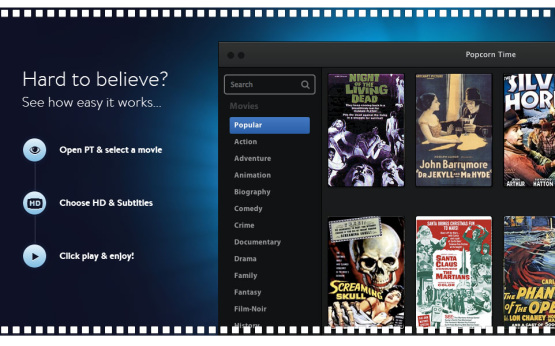 In case you haven’t heard of Popcorn Time, here’s a quick rundown of what it is: (1) Install an app  (2) Open the app and get free, brand spankin’ new movies and TV shows. That’s it, magic. No waiting for new releases or hunting Netflix for the good stuff, all the latest and greatest right there at your fingertips. Make no mistake it is still downloading content in violation of copyright laws so beware. The difference is that now anyone can get these movies as easy as it is to fire up Netflix and in an interface just as nice.

How can this be so?

Well, legally it can’t. Popcorn Time is the easiest way ever to get torrent content; those new movies people you knew (not you!) used to somehow download from the internet are now right there is an easy to use, beautiful app. The kicker is that unlike the music industry which went after Napster for enabling the consumption of music without paying for it, the scary part for Hollywood is that Popcorn Time is an open source program meaning anyone can download and run the code. There is no ‘company’ to go after so the only way to stop it short of going after every person is to go after the torrent sites, a battle that has been failing since the dawn of the internets. The original creators backed away from the project, it disappeared for a day and then roared back as new groups picked it up and have greatly expanded the offering with more content, launched an Android app, and even added Chromecast support. All this is less than two months.

The rise of Popcorn Time is due to the simple truth that people want to watch the newest content without waiting for it or figuring out where to get it. Make it easy to find and consume and people will flock to your service. While Popcorn Time had Oscar winners Frozen, American Hustle, 12 Years A Slave, and more, in Canada the new arrivals on Netflix last month included the first two Bourne movies. Seriously.

What this all means is that the multi-billion dollar movie industry that relies on a business model centred around content rights and availability windows is being massively disrupted and there is little that can be done (remember, there is no company to go after). The scary part is that if Popcorn Time caught on to mass adoption and studios felt the pinch then it could spell doom for great content since it’s the money made from all of these rights dealings that pays for the movies we enjoy. As a consumer its great to get free new movies, but what happens when those movies stop getting made?

(a) Get the lawyers busy trying in vain to shut down torrent sites, domain hosts, and going after everyone that downloads the app

(b) Recognize that the rights business models that have persisted for decades are not in step with consumer expectations in an always-on, instant gratification world and change

Just like their music industry brethren, studios are scrambling the but ultimately there is no stopping this train. The good news is that unlike the development needed to establish music downloads and streaming; iTunes, Netflix, Spotify and others are now in place and widely used. There is no user behavior chasm to cross, all that needs to change is the rules.

All of this is easier said than done. The entire music industry pulled in $15B last year worldwide from recorded music sales while global box office sales totalled $35.9B. Those numbers don’t include what HBO, Netflix, Hulu and others pay for the right to carry content which again outpace what music services must pay; Netflix is rumored to be paying Disney $300M for the rights to its catalogue and getting no new movies until 2016! The good news is that the highest revenue growth is from these streaming services and so the negotiating relationship is shifting. With Popcorn Time putting pressure on Hollywood and in position to jumpstart a potential death spiral for Netflix these two bedfellows should align as the enemy of the enemy becomes a friend.

Given the choice to get what we want most of us will gladly pay a fair price for it. It’s when we’re not given the movies we want but feel we’re entitled to, business models be damned, that we are more likely to use something like Popcorn Time and face the chance that a studio lawyer will pick us out of the millions to march to court. It is a mammoth disruption with billions at stake but eventually we will all be able to get the latest and greatest movies and TV shows through our favorite streaming service or downloaded on iTunes or something like it. It’s easy to envision Netflix adding a Premium subscription plan that costs more than the regular but offers new content.

Walk of Shame which stars Elizabeth Banks opened last weekend and was simultaneously released on iTunes and Pay TV . It did horribly at the box office and rocketed to #1 on iTunes. The shift has already begun, grab the popcorn and enjoy.