Just came across this great article from Neuromarketing that makes a pretty compelling case of the thinking behind Apple’s marketing efforts. Chalked full of insight from Psychologist Henri Tajfel’s seminal experiment on what drives people to commit genocide, to Seth Godin’s Tribes, and overall fostering of the ‘us vs. them’ mentality; it’s a very interesting read, check it out.

Google launched a new salvo in the search battle today and it’s a game changer. Say hello to Google Instant.

Basically, your results will change as you type. No more multiple search queries and result pages, just change what you’re typing until you see the results that match. This has huge ramifications for search engine optimization companies; although sites should still be “optimized”, the number of actual full searches and result pages returned just got obliterated.

I’ve never been a fan of SEO practices that rely on words on a page. These type of “SEO consultants” simply destroy great design and conversion rate in order to try to fulfill the promise of getting listed on search engines. What good is it if a consumer comes to your site only to run away quickly when being confronted with ugly, confusion? Concentrate on great content, navigation, and design to keep consumers engaged. Optimize as best you can without destroying experience and value.

The simple truth is that users will now spend less time on irrelevant results and adjust searches and results on the fly. Getting user attention will be more about content authority, not putting a bunch of keywords on your site.

The tech world is a buzz with the news that Apple has effectively shut out any technology that it deems is not native to it’s platform; most notably sticking it to Adobe only 4 days before the release of Flash CS5 including the much touted ability to render Flash to the iPhone. Here’s the iPhone 4.0 SDK Terms of Service change that has caused the stir:

Wow. This basically says that if developers want to build apps for the iPhone then they need to use technology that Apple has approved and in a manner that Apple requires. The result has been a growing developer backlash against Apple for essentially becoming the tyrant it so famously accused Microsoft of being in the 1984 commercial. It’s a secret no more that this isn’t about open standards or performance concerns, it’s about money and market share. Business is business after all.

At first look the loser here is Adobe, but this also has a massive effect on companies like Unity3D, the amazing platform for creating 3D on mobile, and Appcelerator’s Titanium which was to finally helps us develop once and deploy to all devices. So where do they turn now? Google.

Apple is the undisputed king on the touch mobile world, but Google is catching up and making the right moves. Google doesn’t want to sell you a millions phones. They want Samsung, LG, Motorola, HTC and others to sell you millions of phones running Android, Google’s operating system with the growing number of Android apps. Just like Microsoft owning the market as a result of HP, Dell, Acer and other manufacturing Windows-based PCs, Google is going after the market the same way. Apple by contrast is following the same plan it did with Macs, the difference being this time around they currently lead the market.

Where Apple’s platform is closed and controlled (arguably for good reason), Google’s Android is all about being open….and Google is going to support Flash. Think about that. An open development environment and the ability to develop rich, applications you can download from the web and not have to go through a Store.

Here’s the perfect storm that might be coming Apple’s way, and make it plausible that soccer moms might dump their iPhone:

1. Beautiful Android-based devices hit the market rivaling the iPhone. Likelyhood = High: NexusOne is beautiful, and HTC, Motorola, Samsung and others will be flooding the market this year with phones.

2. Android phones tout features you can’t get on the iPhone. Likelyhood = Medium: You can’t multi-task on the iPhone (yet, it’s coming in iPhone 4.0) but you can on Android phones, you can also get turn-by-turn directions in GPS.

4. Samsung, HTC, Motorola, Google launch commercials showing a great device with great applications…and in the same breath say ‘you can’t get this on the iPhone’. Likelyhood = High.

5. Soccer mom walks into the nearest cell phone shop and says: “I’m looking for a new phone. I love my iPhone but can you tell me about these new ones with the cool apps?” Likelyhood = Medium.

If nothing else, Apple’s decision to restrict developer freedom is a positive for Google. Whether it shifts the balance away from Apple’s dominance of the North American smartphone market rests on whether developers play Apple’s game or not.

Will Apple’s dominance ensure that developers look to stay on and reap the rewards the iPhone/iPad, or will the growth of Android and Apple’s developer restrictions lure consumers and developers to Google? We should know sooner rather than later. 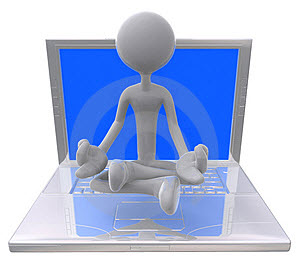 Seems like once a week a recruiter finds me on LinkedIn and calls me up asking if I’d be interested in a VP/Director/Whatever of Digital Media Strategy position at <insert big brand or interactive agency here>. My response:

“I’m flattered but I’m happy where I’m at now. By the way, I don’t think your client needs to hire someone to be in charge of Digital Media strategy, they just need to pick the brain of someone who lives and breathes this stuff. By the time they find someone everything has probably changed anyway. Can you give me their name and number and I’ll call them to chat?”

They’re undoubtedly a little caught off guard, give a nervous laugh, and ask “what do you mean?”

I’ve been through the conversation enough times that it’s time I write this post to answer the recruiter’s question and give a little help to companies wondering payroll should take a Digital Media Strategist hit.

Full disclosure: I make my living helping great companies be digital stars, but more-so I’d love it if every company got value from their digital efforts and not simply  wasted money on double-talking gurus or half-baked efforts because it would mean more amazing web/mobile stuff for us all to enjoy.

So, here’s the list of the top 5 things to consider before putting a Digital Media Executive on your payroll…

By definition a Digital Media Strategist is someone that should be able to tell you what’s going on in digital media and what it could mean to your business close to anytime you ask. They read tech and media blogs at night because they love it. If something major happens and they’re not one of the first to know they get really pissed off. They take being on top of the digital world personal.

So there you have it. There are lots of fast talkers out there because it’s cool to be a digital media dude these days, but test them out and challenge their knowledge (if all they talk about is Twitter and Facebook they’re not who you’re looking for!). Follow these guidelines to be on the right track to digital success with the right digital media strategist helping your team get there. 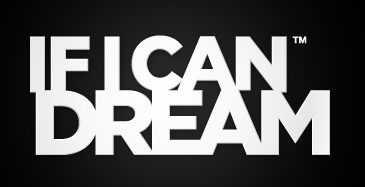 Have you seen If I Can Dream? If not, check it out. Now (ok, after you read this post :)). It’s a feat to be admired, showing what can be done when we think big and work hard to execute. Thanks to Tim Nolan at FITC for blogging about his experiences being involved in the project and turning my attention to such a great experience.

Ok, so what is it? Well, it’s basically an online reality show on steriods. The kind of steroids that would make you Mr./Mrs. Olympia in one dose. It’s not your typical 3 girls in a house broadcasting their intimate moments via webcam. It’s simultaneous video and audio capture, multi-streaming, HD, with a beautiful 3D-like interface, and strategically placed, non-intrusive advertising laced in. It’s an all-digital reality show that runs 24/7, is showcased on MySpace, and let’s anyone with a Hollywood dream submit their own audition tape to get into the house. And the cast definitely don’t have faces made for radio. Oh, and it’s the first show available for viewing on Hulu outside the U.S..

From a technology perspective, Tim put the challenge this way…

The idea was to transfer the Reality TV concept successfully to the Internet. The challenge was… How the f*ck are we going to do this? I mean how do you stream HD quailty video from every angle in the house that TV producer would want to see, how do you rig up all the mics to capture every conversation… In short, how do you make a physical house in Hollywood an all digital, always on 24/7 model for the tech house of the future?

Congrats to the guys at POKE and Entertainment 19. Check out these screen shots, then if you want to marvel at the technology or the cast head on over to the site and have fun. 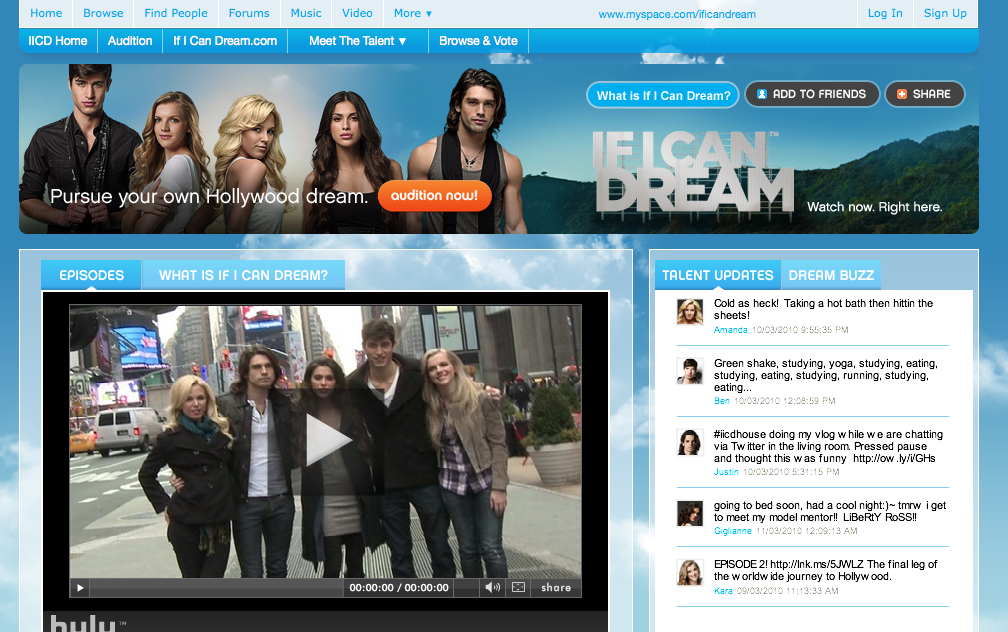